A baby diaper trash can has obviously become a requirement for you, probably that has brought you here! To make your task a little easier I’ve made a selection after comparing myriad of products making the same claim of being the best diaper pail. Check out amongst this collection, the one that meets your specific requirements. 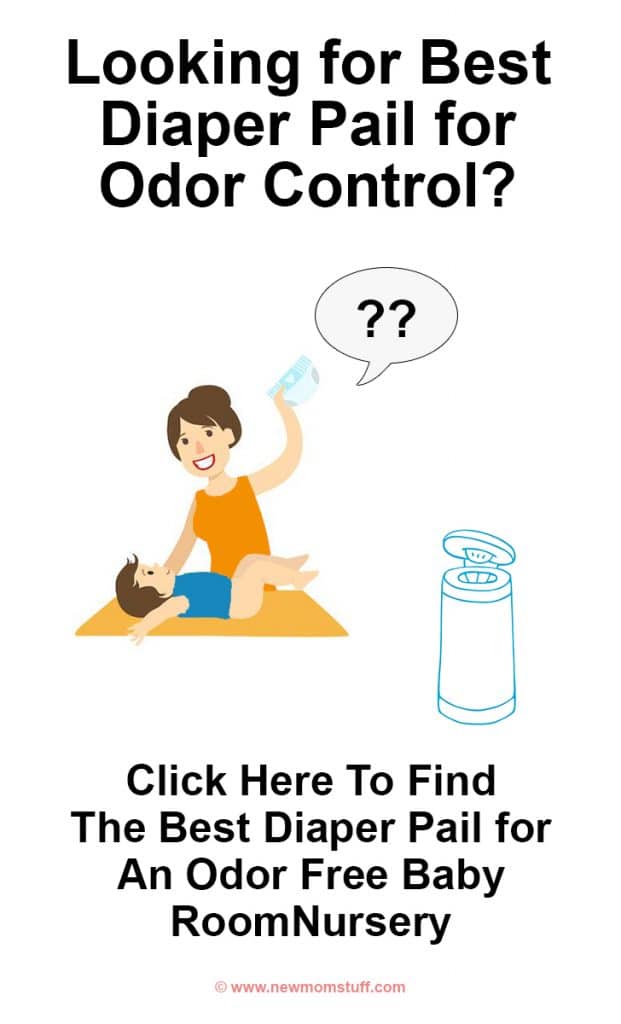 But before that let’s answer this…

Do you need a baby pail?

Probably you do or else why would you be thinking of getting one! Has it happened to you that your baby got handed back to you when his or her diaper needed to be changed? You can’t blame them really, no one likes a smelly diaper! Least of all, when there are 15- 30 odd ones of them sitting stuffed in a garbage bag and stinking up your pretty nursery.

You may have read or heard that a diaper pail does not fall in the absolute necessity list of baby items. And it’s also a fact that a regular trash can could perhaps fulfil the requirement. But, to be honest that is only one part of the true situation, you could find yourself and others actually ending up breathing through your mouth instead of your nose.

The fact is, to truly minimize the stench of dirty diapers, you have only two options. The first one is to run back and forth to dispose every used diaper to an outdoor trash can. And that can get really tiresome and impractical, especially in the middle of the night. Or, you can deploy a diaper pail. Because the diaper bins are built in a design to lock in the unpleasant reek of soiled diapers. These specialized baby diaper trash cans efficiently seal the bad odour, with their scent absorption and trapdoors design, they keep your baby’s nursery from smelling like a potty.

So, let’s move on to the next probable question in your mind … 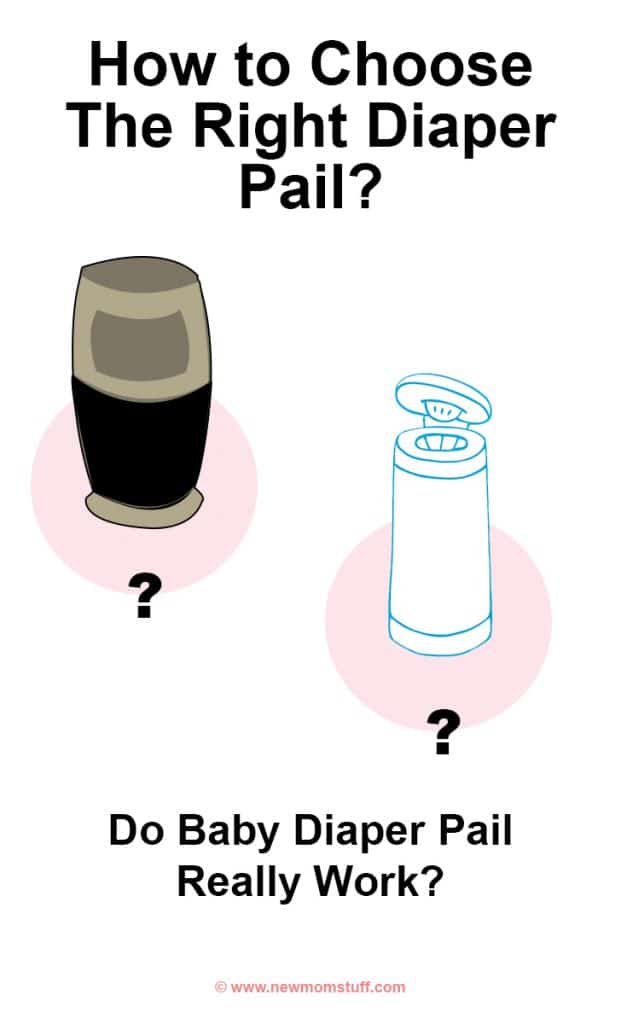 Let’s take a closer look at some of the features you will need to be mindful of when choosing the best diaper pail.

Does the Diaper Pail Lock Odors?

Let’s be honest here, the main essential factor of a diaper pail is to prevent the foul reek of poopy diapers from wafting through all over your home. A diaper pail that does not contain bad smell is, in one word-useless! Different diaper pails employ different lock-in systems to contain odors, for instance, air filters (most often made from charcoal), scented diaper pail liners etc. Irrespective of the technology the diaper bin uses to hold in diaper smells from escaping, make sure that you find it easy to use.

Diaper pails that call for brand specific liners will not work with any liner from a different brand and hence they are generally tend to be more expensive than regular liners. However, diaper bins that are compatible with any liner do perfectly well with standard plastic or household rubbish bags.
Diaper pails that are specifically designed for cloth diapers generally come with a cloth bag that can be thrown in through a washing cycle along with the cloth diapers themselves.

Is the Lid Childproof?

There always remains the possibility of undesirable accidents and incidents especially if your little one is in the toddler stage brimming with curiosity. The possibilities range from God Forbid, suffocation in playing with the liners to having the entire nursery strewn around with dirty diapers! You don’t want either, so you have to make sure that you choose one that comes with a child-proof lid.

How Many Diapers Can the Diaper Bin Hold?

The holding volume of the diaper bin is an important point of consideration. If it’s too small, you will find yourself having to empty it every day or even more frequently; while, larger diaper bins allow you to go without emptying less frequently. But, remember, the longer you allow the diapers to stay in the pail, the smellier it becomes. In case you have twins or more than one child needing diapers then going with a larger sized diaper pail is actually a necessity.

Does the Pail Have a Foot Pedal?

A foot pedal can seem absolutely necessary when you’re doing a balancing act with a poop-loaded diaper in your hand. It becomes worse especially in the wee hours of night! A foot pedal allows you to open the diaper pail easily using your feet!

Does the Diaper Pail Fall Within Your Budget?

With so many things in your baby’s must-have list, budget does become a point to consider. In simple words, generally, the more features a diaper pail boasts, the pricier it becomes.

In our research I worked on several brands of diaper bins to find out which one can possibly meet your specific requirements best, so let’s check them out now…

Every time you put in a diaper, the patented self-sealing lid locks the bag, locking the odor sealed in. So, next time you reopen, that burst of stench will no longer be there. The disposal refill rings and bags are very easy and convenient to snap into place. The vented, deodorized puck continuously absorbs and gets rid of odors even when your diaper pail is not in use. If you need extra refills, they are sold separately.

And do you know, Munchkin assures that “For EVERY diaper pail sold, Munchkin will plant a tree to help make our environment a better place to live.” So, in the process of getting yourself this baby diaper bin, you’re also ensuring a greener earth for your child! Check out all the details here.

This product from Dekor comes in two colors, white and gray…both easily blend with your prettily done nursery, without standing conspicuous and drawing undesirable attention! Surely you wouldn’t feel elated changing diapers 6K-9K times per child? Dekor Hands-Free Diaper Pails are designed specifically to make this tiresome chore as easy as possible for you, and that too within a reasonable budget!

Unlike many other diaper bins which requires you to bend over and operate the lid, to shove in a soiled diaper halfway inside the can, Dekor pails are 100% hands-free! No more Bending, Twisting, Cramming or Squishing! Just step on the foot pedal and drop the soiled diaper through the trap door. It also features a childproof lock to keep your curious little toddlers from messing up the nursery.

When you wish to empty your diaper pail, simply open the easy-access service door and pull out the continuous refill liner only as much is required to remove the contents. Then simply cut off the refill with the help of kid-safe cutter conveniently located inside the access door. Discard the soiled part, tie a new knot in the remaining bag, and you’re done! No need to waste the full bag to empty a half or partially-full pail. Economical, isn’t it?

About odor control, there’s this efficient triple odor control system that keeps the stink inside the pail. First, there’s the spring-loaded trap door that shuts immediately after the diaper passes through. It is followed by rubber gaskets both on the trap door and the top lid, that lock in the odors tightly inside the pail. And finally, the refillable liners neutralize odors with a pleasant scent like that of baby-powder. Because these pails are constructed with closed-cell ABS plastic that works like metal but don’t rust, they don’t absorb odors like cheaper plastics, do not dent, and are fade and scratch-resistant. You can use these particular diaper pails for cloth diapers as well with the Dekor Cloth Diaper Liner!

Next in the selection is a diaper bin exclusively for cloth diapers,

Best Diaper Pail for Cloth Diaper: Is your child’s skin sensitive or allergy-prone?

This pail could be a perfect choice for parents who don’t wish to use disposable diapers for their new-born at the very beginning! Their choice is quite justifiable because with your new infant you might not know whether he/she is allergic to any other material, so, cotton diapers are the safest choice. Especially, when you don’t know yet whether your little one’s tender skin is prone to allergies or not!

It has a wide opening making tossing in a soiled diaper easy as breeze, and a durable lid secured by two side handles. The odor-free carbon filters, lets in air but locks in the stench from escaping. Its brand specific Teddy Bear filter cage holds the carbon filter along with screws through hole in the lid.

Nevertheless, one thing that I found majority of the buyers vouching for is the odor locking capacity of this Odorless Cloth Diaper Pail (7 gallon).

Probably there are still some more pertinent questions in your mind regarding this pail. For instance, do you need to spray cloth diapers off before you put them in the diaper pail? Or points like can mold be an issue ever? Find out answers to such questions! They are no less in terms of hygiene, especially when it concerns your child.

I hope that with these diaper pail reviews , you now have a good insight into the various types of diaper pails, making the rounds in baby items market and now you are ready to choose the best baby diaper pail that suits your requirements to the tee! So, get the one of your choice from above and say good-bye to poop stench for good!